Praxair (PX) is one of the largest suppliers of industrial gasses in the world. The company is not an overnight success; Praxair was founded in 1907.

Despite its long corporate history, Praxair did not go public until 1992. Praxiar is nothing if not consistent. The company has raised its dividend payments each year since going public. The company will likely join the list of Dividend Aristocrats in 2017, when it reaches the required 25 years of consecutive dividend increases.

Praxair will not be able to grow its dividends faster than earnings indefinitely. The company currently has a payout ratio of 46.8%. Dividend growth will likely be in line with earnings-per-share growth going forward as Praxair uses its cash flows to repurchase shares and invest in growth.

Praxair has 3 distribution methods to deliver its gasses to customers.

For large customers, the company will build a factory at or near the customer’s facility. These large-scale operations are typically protected by 15 year or 20 year contracts. When cash flows are protected for the next 1 to 2 decades, you know the product is absolutely essential for customers.

Praxair’s smaller customers either pick up cylinders of gas from retail outlets, or have them shipped from Praxair plants. The image below from Praxair’s June 2015 Deutsche Bank presentation summarizes the company’s contract-based distribution model. 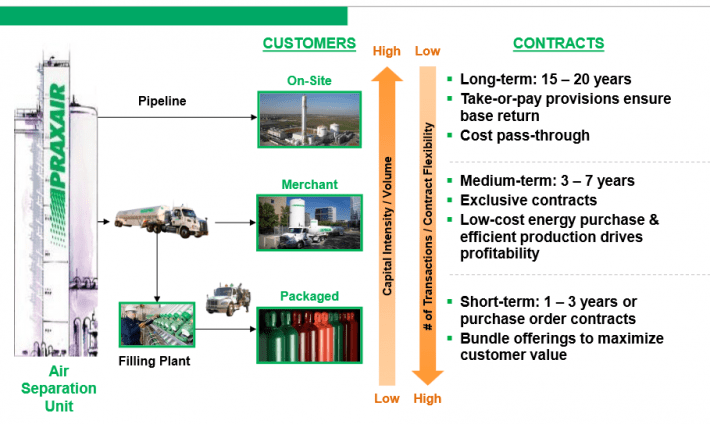 Praxair supplies a wide variety of gasses, including Oxygen, Nitrogem, Hydrogen, Argon, Helium, Xenon, and many others. The company’s gasses serve customers in many different industries, including manufacturing, metals, energy, chemicals, food and beverages, electronics, and health care.

Praxair generated 52% of its sales in North America in fiscal 2014. The company also has large presences in Europe, Latin American, and Asia.

Praxair is trading in line with both Airgas and Pentair. All 3 of the company’s peers have similar forward price-to-earnings ratios as compared to Praxair. Based on an analysis of its peers, Praxair is trading around fair value at this time.

Praxair’s 9.7% earnings-per-share growth over the last decade gave investors solid returns. The company is not new – growth will likely continue to be solid over the next several years.

Praxair is developing a large supply chain in the Gulf Coast region in the United States. The company is spending $400 million to expand its hydrogen and nitrogen systems – including expansion of its pipelines. The move strengthens the company’s position with oil, gas, and chemical corporations in the rejoin. The full benefits from the expansion are expected to accrue in 2017. This project will provide a growth boost for Praxair. The image below shows the company’s infrastructure in the Gulf Coast rejoin. 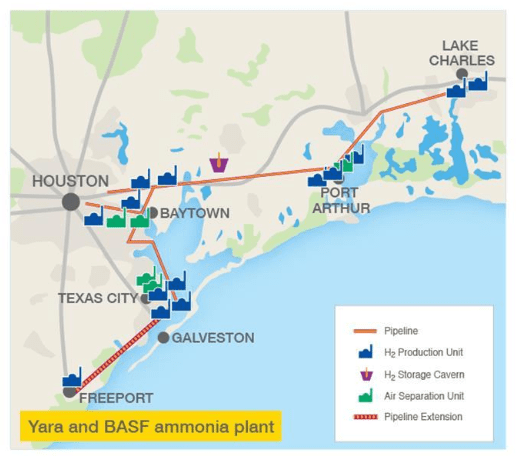 Praxair currently has around $9.4 billion in debt on its balance sheet. The company has ‘just’ $117 million in cash on hand. Praxair has leveraged itself to take advantage of the stability of its cash flows. The company has an interest coverage ratio of 12.2.

Even if earnings were to decline by 50% – and keep in mind they only fell 8.4% during the Great Recession – the company would still not be in any bankruptcy danger. Praxair has a significant debt load, but the company maintains a high margin of safety in regards to its debt compared to its operations.

Praxair’s streak of 22 consecutive years of dividend increases should put investors minds at ease. It is highly likely the company will continue to pay increasing dividends over the next several years.

Praxair’s dividend growth will likely be slower over the next decade than the previous. I expect dividend growth of between 8% and 10% a year, about in line with earnings-per-share growth. The company will likely not continue to increase its payout ratio.

The company currently has a dividend yield of 2.4%. Praxair’s dividend yield combined with its expected earnings-per-share growth rate of 8% to 10% a year gives investors an expected total return of between 10.4% and 12.4% a year over the next several years.

Praxair does not quite have a long enough dividend history to be eligible for inclusion in the Sure Dividend database using The 8 Rules of Dividend Investing.

Joshua Rodriguez - November 9, 2017
0
Top Ships Inc (NASDAQ: TOPS) is having yet another rough start to the trading session today, and for good reason. After exceptional gains early...

How to Sell Your Car if it Doesn’t Run

8 Little-Known Financial Benefits of Being in the Military

Pain Therapeutics (PTIE) Stock | Where Will It Go Next?