Home Archived Articles Wal-Mart Is the Ideal Stock for the Next Recession
Share
Facebook
Twitter
Google+
Pinterest
WhatsApp
Wal-Mart (WMT) is the largest discount retailer in the world. The company has generated $485.6 billion in sales over the last 12 months. Wal-Mart has profits of $15.5 billion in the same time period.

The table below compares Wal-Mart’s size to its largest competitors in the United States:

The table above clearly demonstrates that Wal-Mart operates on a different scale than its rivals. Despite being the undisputed industry leader, Wal-Mart is the cheapest of these businesses.

Amazon doesn’t have a price-to-earnings ratio, but even if it was profitable, it is trading at a lofty valuation. Click here to see Wal-Mart and Amazon compared in detail.

The image below shows Wal-Mart’s dividend yield over the last decade. 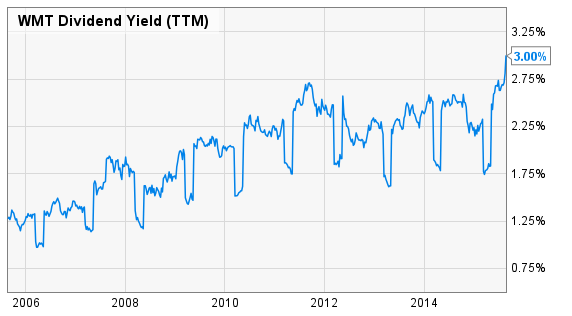 As you can see Wal-Mart has never had as high a dividend yield as it does now. The company is currently yielding 3.0% – well above the S&P 500’s dividend yield of 2.2%.

Investing in high quality businesses when they are at their maximum historical dividend yield tends to produce fantastic long-term results.

The recent guidance reduction gives investors an excellent entry point into Wal-Mart. Wal-Mart is uniquely situated to perform well if we enter into a global recession.

Wal-Mart performed exceptionally well during the Great Recession of 2007 to 2009. The company’s earnings-per-share each year through this difficult time are shown below:

For comparison, take a look at the earnings-per-share of the S&P 500 over the same time period:

As you can see, Wal-Mart rolled through the Great Recession as if it didn’t’ even happen. The average business in the S&P 500 suffered significant earnings declines.

The reason Wal-Mart did so well during the Great Recession is its reputation for low prices. When hard times set in, consumers stretch their dollars farther. Wal-Mart has a reputation for selling merchandise at ‘every day low prices’.

The global economy looks shakier now than at any point since the Great Recession. There is turmoil across the globe – both political and economic.

What’s even more troublesome is that central banks have not yet ‘reloaded’ from the Great Recession of 2007 to 2009, and the recent struggles of the Euro zone. Interest rates are still near historical lows, the central banks of China and Japan are actively buying stocks (if this isn’t irrational bubble behavior, I don’t know what is), and inflation is ravaging many currencies around the world. It is hard to think that more ‘quantitative easing’ will really pull us out of another recession.

If things do continue to get worse – you can do much worse than have your money invested in the world’s largest discount retailer. In 2008, The S&P 500 fell 37.0%… Wal-Mart stock gained 21.6% due to higher earnings and an influx of investors fleeing to one of the only businesses that was still thriving.

Wal-Mart’s recent sell-off from its earnings miss gives investors another chance to load up on one of the world’s most recession resistant stocks.

It is a fool’s errand to predict when the next recession will occur. An analysis of current macroeconomic events points to a recession happening sooner rather than later, but things could always change.

With Wal-Mart, investors can hedge for a recession while still owning a businesses that has paid increasing dividends for over 4 decades.

I don’t know when the next recession will occur. Whether it does or not, I feel very comfortable holding shares of Wal-Mart – especially with a 3.0% dividend yield and a price-to-earnings ratio of just 13.4

Source: Wal-Mart Is the Ideal Stock for the Next Recession

Joshua Rodriguez - November 9, 2017
0
Top Ships Inc (NASDAQ: TOPS) is having yet another rough start to the trading session today, and for good reason. After exceptional gains early...

How to Sell Your Car if it Doesn’t Run

MannKind (MNKD) Stock Is Back On The Rise | Will It...